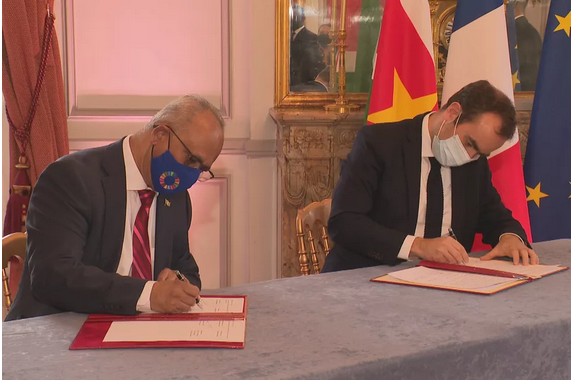 The Maroni river basin was at the center of the discussions held in Paris on Monday 15 March 2021 between Mr. Albert  Ramdin, Minister of Foreign Affairs (Suriname), Mr. Kenneth Amoksi, Minister of Justice and Police (Suriname) and Mr. Lecornu, Minister of the Overseas (France).

During the meeting, a historical protocol has been signed that sets the delineation of the border between both countries on the Maroni and Lawa rivers. This protocol completes the Paris convention signed in September 1915, which clearly established the border delineation and the sovereignty over no less than 950 islands, located upstream and in the middle of the transboundary river basin, from its mouth to Antecume Pata. The southern part of the border area, located in the South, upstream of the mouth between Litani and Marouini rivers, still remains under negotiations between France and Suriname.

This major progress in diplomatic relations opens the path to important perspectives in terms of health, security, navigation, tourism or fight against illegal gold mining activities, a crucial security and environmental issue in this border area.

A Declaration on the « common management of the Maroni and Lawa rivers » has also been signed. It foresees, among others, the “protection of local populations, including through the monitoring of flooding risks on the Maroni and Lawa River”, and considers the cooperation in the fight against pollutions and a cooperation “to maintain the rivers and develop the riverbanks, to protect the environment and preserve the biodiversity and the quality of the water in the rivers”. The Declaration promotes a sustainable, suitable to the local context and environmentally sound economic development. It proposes States to consult with one another about projects that could have an impact on the rivers waters.

The BIO-PLATEAUX project welcomes these impressive steps forward, calling for a reinforcement of the cooperation on water resources management between Suriname and French Guiana on the Maroni river basin.

Finally, that same day, the signing of a mutual assistance convention in judiciary matters formalized the strong will to cooperate also on the criminal challenges specific to this territory.